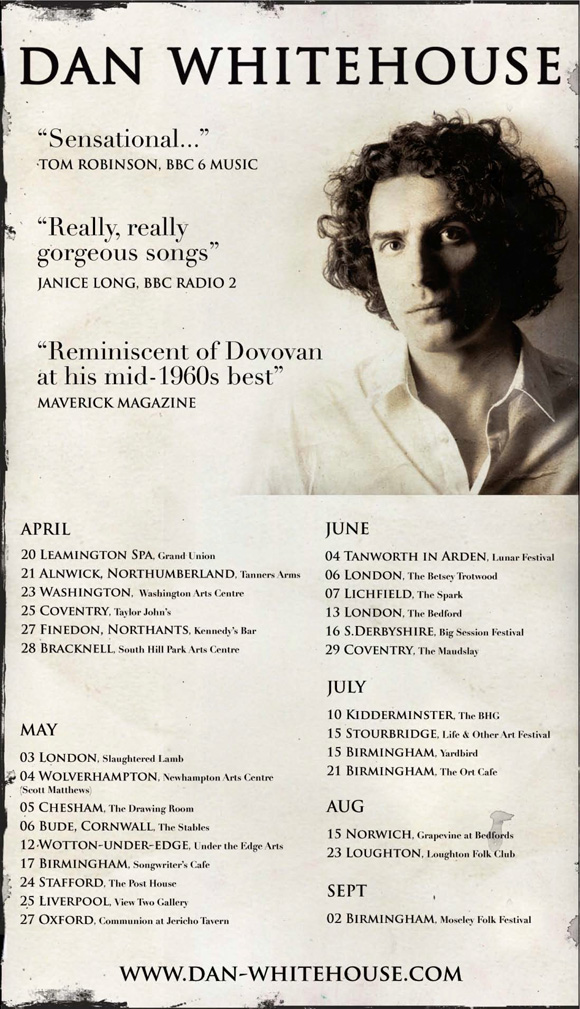 Whilst my music has been described as having pastoral folk influences and I use acoustic instruments the lyrics narrate modern life. I live in the city and in my experience, sharing a cup of coffee with a good friend is the closest many of us get to the confession box, and for me, talking things over with a coffee can be good therapy time.

Whether it’s meeting people, chewing the fat, caffeine hit, clarity of thought, lists, dreams, decisions, reflective thoughts. You can achieve a lot over a cuppa, and that’s why it made it onto my album…

The track (my stupid face) features a field recording of Michael Clarke (producer) drinking coffee in the bull ring, blended with the sound of me drinking a cup at New Street station. The songÂ marks half-time on the album, the midway point where traditionally you would have to turn the record over to side b. The sort of forced silent moment that has been lost in our trigger happy digital age where if you’re not getting your kicks, you click.

Itâ€™s a very reflective lyric and I wanted to represent a personal, quiet moment of self analysis. I tend to have over dramatic facial expressions. People walking in the street, or fellow drivers on the road often mis-read me and presume I giving them a dirty look. I donâ€™t mean to do it, I just tend to worry a lot and have a furrowed brow!
What iâ€™m saying in the lyric is that no matter how ugly or silly my face looks, my ears are open and ready to listen.

Hope to see you out on the road this month.

It is always so lovely to hear tales of songs resonating throughout the wider community.Â Just got this email…

â€œI sent your video to my Dad who has a heart condition and has just had a pacemaker fitted. He played it 3 timesÂ … then replied to say how much he likes it.”

My Heart Doesn’t Age (It Just Gets Older) Video

Iâ€™ve worried and doubted a lot of things throughout my life, but never the power of music. The power of music is a strong pillar in my landscape.
In addition to songwriting I do a lot of music workshops with adults with learning difficulties, using music in a therapeutic way.Â Working with small groups of people in various arts centres, schools, day centres and care homes across the West Midlands.

Some participants are classified as having ABI (acquired brain injury) and suffer from memory loss.Â With these participants I use songs and melodies that act as memory triggers.Â Together we compose short bursts of melody and lyrics that remind them of names, dates, family members, holidays past and future, any events in their life story.Â I also dip into popular music repertoire, usually looking for songs that were significant in their life, remind them of times gone by, previous relationships or pre accident events.

This work hasnâ€™t radically changed my perception of the power of music, itâ€™s been a process of affirmation. Music has always been there for me and now Iâ€™m more confident than ever that music, and specifically the process of music making MAKES LIFE BETTER! x

It’s on Wednesday April 4th and we’ll be on stage at 8pm.

I have a batch of reduced tickets, so if you’re planning on coming please email me:

Tickets are Â£7, as opposed to Â£10 from the Water Rats site.

This show marks the start of a busy patch, with dates across the UK.

West Midlands based folks should be aware that tickets are on sale now for Glee Club Birmingham on Friday April 13th. It will be a very special night, with guests Timberwolf (Michael Clarke) and Paul Liddell playing too. 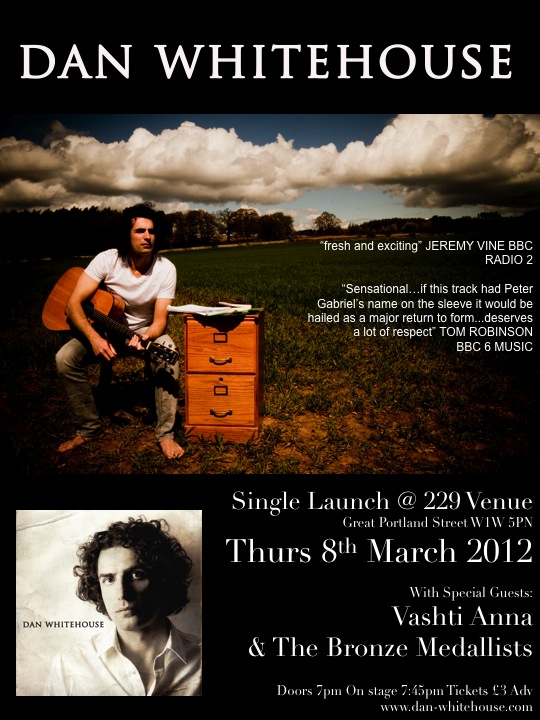 Friday May 4th at Newhampton Arts Centre Wolverhampton. Tickets will be on sale very soon priced Â£12.50 adv from the Newhampton site.

Needless to say I’m looking forward to this special occasion:)

It will be a real honour to support Scott.

It’s a real honour to be included in the Net RhythmsÂ top 10 albums list. I urge you to head on over to the Net Rhythms site and check out out the other records on the list, there are some wonderful gems to be found. Rarely do you discover a music review site so heavily weighted with substance over style, well written reviews, and info on all the new roots/folk releases.

But then, I would say that.

This is a diary entry I wrote in 2004. I’d recently been dumped (by a musician partner, not a lover) and perhaps I was looking for an explanation, didn’t see it that way at the time though! It was a Sunday afternoon in November, sat on a bench in covent garden. I was really hungover but it was one of those good ones, where in addition to the sandpaper tongue/piercing headache/intermittent retching you actually feel enlightened, a good blow out. I was feeling quite tender (emotionally and physically!) and wanted to make sense of the stuff spinning round my head, to find a reason why someone I had trusted and expected so much from had up and left, without warning. Having a good writing session really cleared my mind, and I felt so happy and excited I even began to find answers for other questions hanging around my neck, likeÂ why do I feel compelled to sing & write songs?
Then the answer came. Hurrah. So chuffed. Some weeks later I bought an A1 size piece of yellow card and copied this paragraph out in HUGE letters and stuck it to my wall, I remember being so pleased with myself, convinced I’d worked out my own littleÂ meaning of life. In the years that have passed it’s remained relevant to me, so I stuck a bit of it inside my album sleeve. Been a little worried folks won’t understand the fragment I stuck in the album, so here it is in full:

Sometimes, I understand you.

We donâ€™t know each other. We think we do, but how can we when the information inside our heads is hidden, by a lot of flesh, bone andÂ expression. There are some holes in the face of course and these reveal a little. When Tim Booth singsÂ â€œsometimes when I look deep into your eyes I swear I can see your soulâ€Â the key word for me is â€˜sometimesâ€™.

Sometimes thoughts get mixed up, or misunderstood. You may have communicated with someone and just them mouthing words, making sounds â€“ this act alone has made you really upset or angry or whateverâ€¦we are all compassionate.

We hold each other in theÂ communal cradle of our actions, of our words too, and of course (the fun bit in my opinion) ourÂ expression.

Kiran and I have been friends for a long time, our Mother’s were friends so it’s kind of since before we were born. He he.

Earlier in the year I sent her a rough copy of the album I was working on, and invited her to have a listen. I might have hinted that I was curious to see if the songs would inspire any other art.

Didn’t hear anything from Kiran for a while, but was delighted to receive a beautiful, hand crafted, illustrated book for my song My Heart Doesn’t Age (It Just Gets Older) in October.

This website and screen probably won’t do it justice, but I am keen to share this so here goes. Perhaps you could listen to the song at the same time. 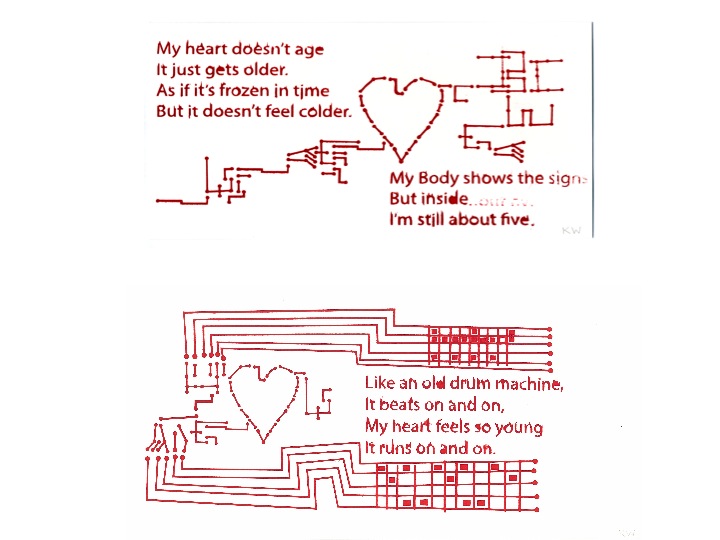 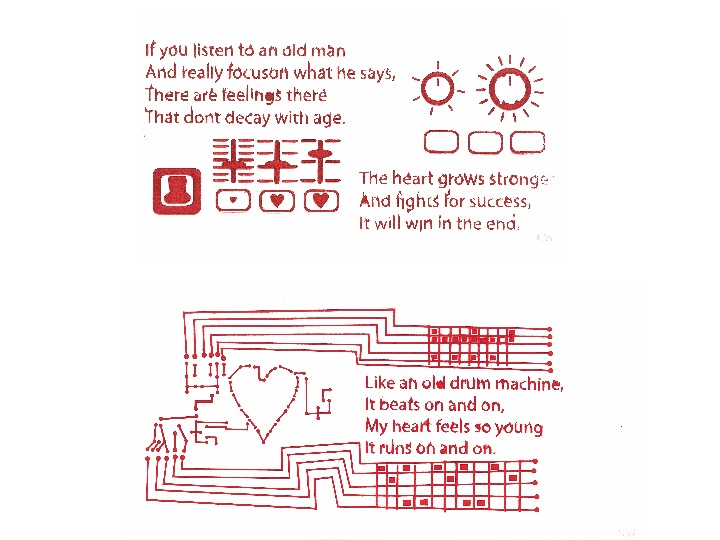 Back from my travels to Bristol and London, and a fun Wolverhampton gig sandwiched between.

Whilst in London I managed to sit at the writing desk of HG Wells and enjoyed some cucumber sandwiches with no crusts, in Bristol I watched Wilco and found a GOOD cafe that I want to play at but can’t remember the name of.

I am in the process of sorting out a few things, more gigs, video footage from last weeks gig at the Glee Club Birmingham, remixes, and scanning artwork. Said artwork is perhaps the most exciting feature of my week. My dear friend Kiran Williams has produced a truly beautiful book of the song ‘ My Heart Doesn’t Age (It Just Gets Older). I have had it scanned at a print shop but I am not happy with it yet, I want to share it with you in the best possible manner of course.

Have you seen the photographs Carsten Dietrich took of the Glee gig last week? Have a look here

My Tweets
This site uses cookies: Find out more.